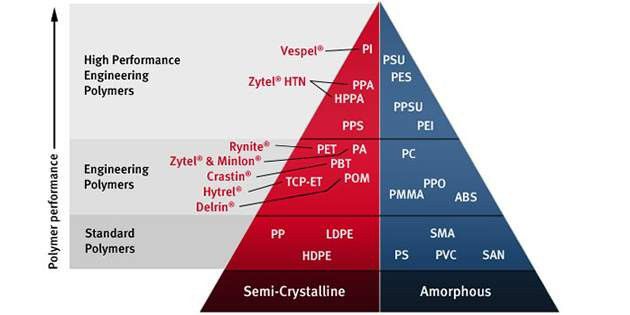 Because they maintain excellent strength and toughness during exposure to hot, aggressive automotive fluids and to hot air whether humid or dry, high performance polyamides (HPPA) can make durable, functional components for automotive thermal management and other demanding applications.

The use of engineering thermoplastics in automotive components has grown significantly over the last 25 years with many new applications in powertrain, electrical components, chassis, trim components and other vehicle areas. Typical modern vehicles have more than 100 kg of plastic components. Some of the main forces driving demand growth include weight reduction, production gains (easier assembling, integration of parts and systems) and more design flexibility.

In recent years, temperatures in the engine compartment have been rising because of reduced space and more powerful engines. The temperature resistance of plastics parts has consequently become even more critical. Weight reduction also continues being an issue to help reduce fuel consumption. These factors can be expected to lead to increased use of polymers with higher temperature performance such as PPAs.

The resistance of PPA’s to antifreeze is another factor in their favor. In an investigation of the effect of antifreeze solutions on polyamides in 1995, Garrett and Owens  concluded that the performance of semi-aromatic PPA is superior to that of aliphatic polyamides such as nylon 6 or nylon 66.  We have extended their study by measuring the performance of different types of PPAs and their resistance to today’s more aggressive long-life coolants in 5000 hour tests consistent with today’s extended warranty intervals.

Polymers are often used in combination with other ingredients to make a useful product. This combination of polymer and additives is often referred to as a plastic, or a composite. Typical ingredients used to produce composites are fiberglass, mineral, heat stabilizers, flame retardants and other processing aids.  Most of the products we discuss in this paper are composites with 30 to 35% by weight of fiberglass reinforcement, or GR for short (Glass Reinforced).   Fiberglass reinforcement provides strength and stiffness particularly as the temperature is increased beyond the polymer’s glass transition temperature (Tg), where the amorphous region becomes mobile.