DuPont™ Tyvek®, a low lint packaging material, plays an important role in reducing the risk of contaminating either the medical device, pharmaceutical or the sterile field when a medical package or pharmaceutical is opened. Unlike medical-grade paper, which can release a significant number of particulates when a package is opened, Tyvek® has a unique, continuous filament structure that results in clean peel and low lint features.

Particulate generation tests comparing Tyvek® to medical-grade papers showed conclusively that Tyvek® is a low lint packaging material that generates far fewer airborne particulates that could contaminate the medical device or the sterile field. The particulate generation testing measured the quantity and size of particles generated by Tyvek® and medical-grade paper both before and after being torn in half.

For the testing, samples of three different medical-grade papers, Tyvek® 1073B and Tyvek® 1059B were each tumbled in a tumbling drum to release particles from the tested materials. The drum was housed in a HEPA filter lab bench. The lab bench air was filtered with two pre-filters and one HEPA filter. Air was supplied by a blower with a pressure drop across the filters of 0.5 in. (1.3 cm) of water. Sampling of the number and size of the generated particles was done with a cleanroom monitor coupled to a paper tape printer. All of the equipment was in a temperature-controlled, HEPA-filtered-air cleanroom that had full air exchange approximately every minute. 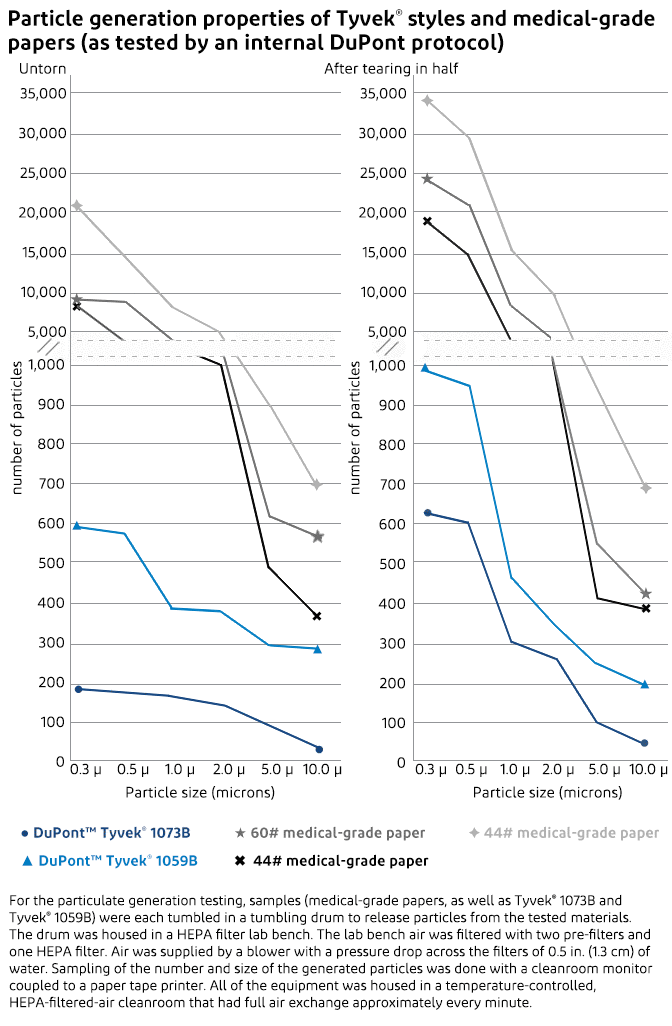