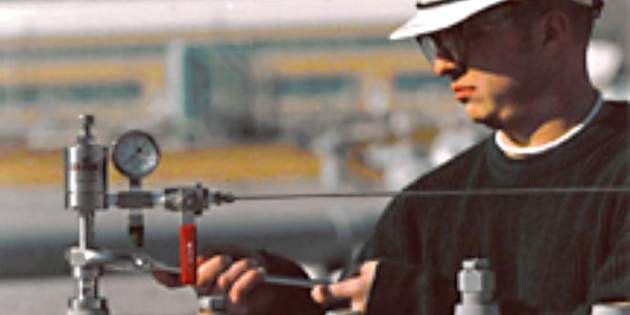 Transporting natural gas from well to consumer is a delivery challenge faced by industrialized nations throughout the world. In the United States alone, well over 270,000 miles of above- and below-ground pipelines are dedicated to delivering gas to the millions of households and commercial businesses that rely on natural gas for heat and energy.

Natural gas delivery networks consist of high-strength steel piping, ranging from 2 inches to 42 inches in diameter, which carries the gas at pressures that range as high as 3,000 pounds per square inch. Traveling at a speed of about 30 miles per hour, a flowing gas stream can take several days to make the journey  from a producing site in Texas to a utility customer in the Northeast. During this journey, the gas stream can accumulate contaminants including moisture, sulfur, and chemicals left over from the production process, all of which can affect the purity and thermal quality of the gas. At several points during long passages in the pipeline, contents of the pipeline are sampled and analyzed to determine BTU (energy) value of the gas as well as its moisture and chemical content.

The Genie® Probe Regulator (GPR™) from A+Corporation is inserted into a pressurized pipeline to extract a sample to test the purity and energy content of natural gas. The GPR™ utilizes Kalrez® Spectrum™ 6375 O-rings to provide a liquid- and gas-tight seal.

Test Samples Must Be Contamination Free

The three types of testing procedures used to evaluate the purity and energy content of natural gas are Moisture Analysis, Sulfur Analysis, and BTU Analysis. All three test methods require a stable, representative sample of the pipeline gas that is free from entrained liquids such as condensed hydrocarbons, amines, and glycols. Securing such a sample from a pressurized pipeline is the job of a gas-extraction instrument known as the GENIE® Probe Regulator™ (GPR™) developed by A+Corporation, Gonzales, Louisiana.

The GPR™ probe is inserted into the pipeline to capture a sample from the gas stream. Gas enters the probe through a spring-loaded foot valve assembly at the bottom of the unit. From there, it passes through a special membrane filter system and then through the built-in pressure regulator of the GPR™. The membrane filter is designed to reject the liquid hydrocarbon content of the gas at line pressure and temperature and to remove any other contaminants present in the pipeline gas, including liquid glycol and amines. According to its manufacturer, the GPR™ probe provides a representative sample that can be evaluated without fear of harming the analyzing equipment or contaminating the sampling system.

The foot valve at the lower end of the probe (see diagram) controls the entry of pipeline gas into the GPR™ and liquids rejected by the filter/membrane to gravity-flow back into the gas stream. The O-ring on this foot valve must provide a positive liquid- and gas-tight seal whenever the probe is extracted for servicing the membrane. Because of the harsh chemical environment produced by the pipeline, engineers at A+Corporation required an O-ring made from a chemically inert material that would complement the record of the GPR™ for unquestioned sealing performance and yet permit its use in a broader range of applications.

Don Mayeaux, Founder and CEO of A+Corporation, describes his company's search for the best sealing material for the foot valve: "When we introduced the GENIE® Probe Regulator™ (GPR™) in February, 1999, we used fluoroelastomer and then neoprene O-rings. These were effective and reliable. But we noted a superior level of performance in a broader range of applications in December, 2002, when we evaluated DuPont™ Kalrez® Spectrum™ 6375. Our comprehensive field testing confirmed that the material would perform to our industry leading standards in the most severe service applications.”

Don Mayeaux credits the success of Kalrez® Spectrum™ in the foot valve to its outstanding combination of chemical resistance and mechanical sealing properties. “Since incorporating the Kalrez® O-ring, we have continued to receive outstanding field reports of flawless performance with the GPR™. And we have thousands of units in service throughout the world," he said. “ Kalrez® O-rings also have significantly expanded GPR™ service compatibility beyond natural gas pipeline applications.”

For the most aggressive environments in chemical and hydrocarbon processes, the Kalrez® Spectrum™ family of parts can provide long-term sealing reliability.