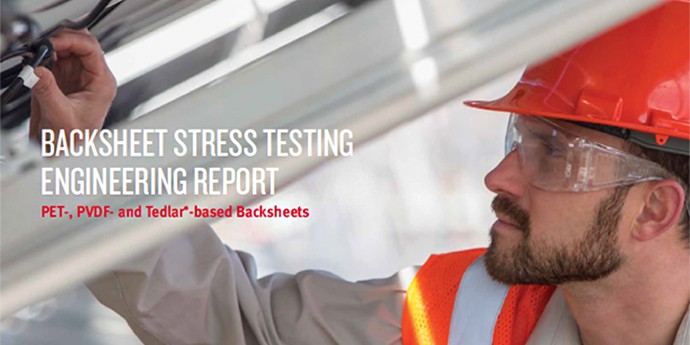 Read the report to learn more

For its study, DNV GL employed the Module Accelerated Sequential Testing (MAST) method, developed by DuPont. MAST uses a sequence of damp heat, followed by repeated UV temperature cycling steps, to replicate conditions experienced in the field. During and after the test, DNV GL researchers visually assessed the PV modules and measured their performance.

The testing revealed that in modules made with PVDF backsheets, cracking occurred in air-side layers over busbars. Visible cracks appeared on the backsheet over all busbar ribbons in the long machine direction of the module, indicating mechanical weakness along the transverse direction.

Test findings for PET-based backsheets showed significant yellowing, a sign of polymer degradation and mechanical weakening. The PVDF and PET backsheet failures noted in the test were also observed in the field.

The Tedlar® PVF-based backsheets showed no changes. In fact, Tedlar® backsheets have served in the field for more than 30 years with no observable change.

Copyright © 2020 DuPont. All rights reserved. The DuPont Oval Logo, DuPont™, and all products denoted with ® or ™ are trademarks or registered trademarks of E. I. du Pont de Nemours and Company or its affiliates.