Ula Einstein, an artist living and working in New York City, was walking through a Washington, D.C. neighborhood while visiting friends and became intrigued by what she saw—dozens of houses under construction were wrapped in a white material. She didn’t know what it was or why it was there but says she was extremely curious to find out.

“I spoke with a construction worker at one of the houses and was fascinated to learn that this white material called Tyvek® was a protective layer installed before the brick was applied to the house,” said Einstein.  “I had never heard of it before and only later learned that Tyvek® was also used as a packaging material, which appealed to my interest in packaging and culture.”

“At the time I discovered Tyvek®, I was studying Eastern philosophy and the reference of our body as a temple,” she explained.  “The symbolism of Tyvek® to protect and secure the house fit perfectly.  Also, as an artist I think about the nature of skin, which is a tactile connection between the interior and exterior. To me, Tyvek® speaks to that.”

Creating with Tyvek®
Driven by a fascination with this newly discovered material, Einstein bought her first roll of Tyvek® in 2008 at an art supply store in New York.

“Chance, control and uncertainty are as much qualities of life as in my work,” said Einstein.  “Guided by concepts, drawn to the tactile, I’m extending and amplifying characteristics of Tyvek® which are perhaps not part of its original function.  I have to mess with things, to make them visceral.  I have some understanding of the qualities of Tyvek® but then intuitively detour and alter, pushing the scope.”

Most of Einstein’s works with Tyvek® start with cutting, then she manipulates them using a variety of self-invented techniques, including: painting, scorching, piercing, crumpling, searing, drawing out and layering. The result? Innovative works that straddle the space between painting and sculpture.

Her most recent works with Tyvek®, titled Hybrid In(ter)ventions, were exhibited in 2015 at “The 21st Century Artist as Nomad” at the FLUX Art Fair in New York City.

Einstein plans to continue pushing the boundaries and exploring the allure of creating material abstractions from what she describes as a “humble, advanced, multi-purpose” material.  Her 2016 works with Tyvek® will be developed during a three-month residency at ESKFF/MANA Contemporary NJ, beginning in September 2016.  She was chosen for this prestigious Fellowship Studio Award, made available through the Eileen S. Kaminsky Family Foundation (ESKFF), based on her unique work with Tyvek®.

Reflections from the Artist

“My work with Tyvek® has developed most fully and with greater complexity in the last year,” noted Einstein.  “Each thing I learned about Tyvek®, the fantastic mistakes I made and the so-called accidents, added to my depth of experience, my process increasing dimensionality, beauty and potential out of a functional material.”

“I welcome the unexpected, which aligns with my experience that things are rarely as they first seem.  And, I like the creative tension between the synthetic and the organic,” explained Einstein.  “Enough people asking about my process brought to my attention that I alter the Tyvek® material so radically, making this substance unrecognizable from its original state,” said Einstein.  “I appreciate that its use invites mystery and inquiry.”

Ula Einstein is a Swiss-born, multi-disciplinary abstract artist living and working in New York City.  She has been a practicing/exhibiting artist for 20 years.  Her work is internationally exhibited in galleries, museums and nonprofit art spaces, and is included among numerous private collections. Her work has also been featured in several publications and online magazines. 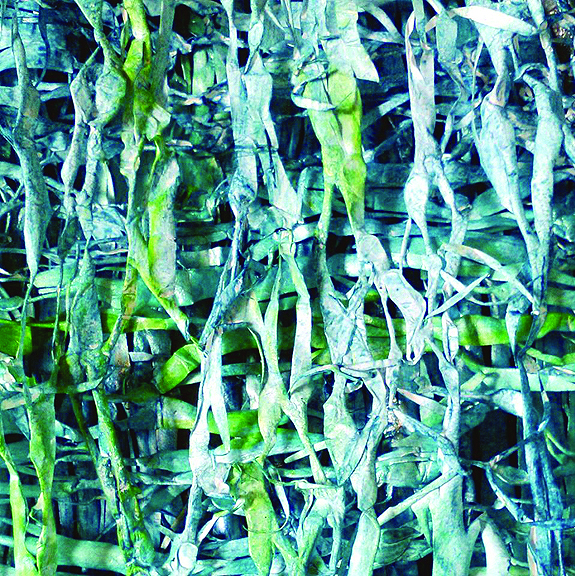 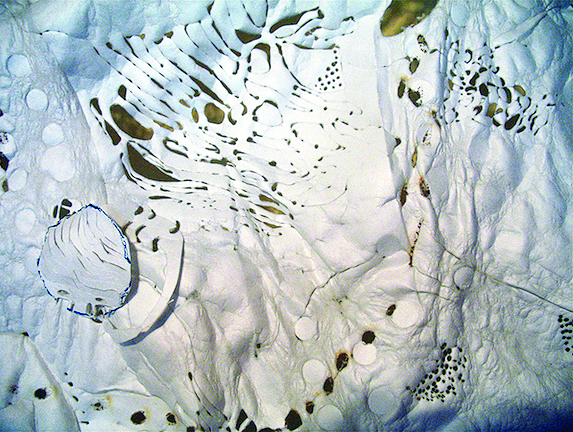