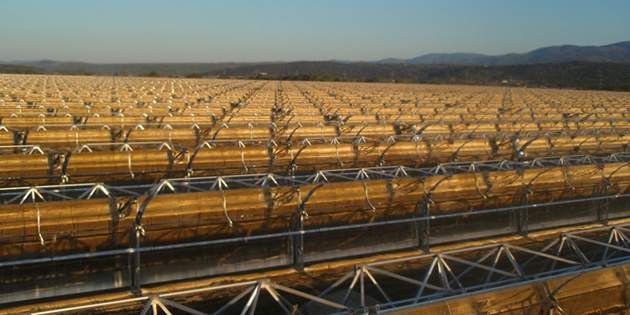 DuPont materials have been used in the photovoltaic industry for more than 30 years. We have been part of the process as the efficiency of solar systems has risen, and costs have fallen. We continue to collaborate to help make photovoltaic systems more efficient, and also more cost-effective for producers and customers, everywhere the sun shines.

At a solar thermal power plant belonging to ACCIONA Energía S.A. in Majadas de Tiétar, Spain, low friction bearings made from a particularly low-wear and low-friction grade of  DuPont™ Delrin® support a total of 192,000 parabolic mirrors.

Low friction bearings made from Delrin® possess a very low dynamic coefficient of friction of 0.13 (standard grade: 0.35), enabling the consistent, smooth and millimeter-precise positioning of the hydraulically operated mirrors in accordance with the sun’s movement. The high wear resistance of the material helps improve the plant’s overall effectiveness with reduced maintenance costs, when compared to steel bearings. This ultimately helps reduce total operating costs, and thereby, the cost of energy production.

For an inverter made by SMA Solar Technology AG, Niestetal of Germany, DuPont™ Zytel® is used for an inverter cover that is both flame-retardant and wireless-compatible.

Inverters have long been at the heart of solar systems, converting direct current produced by the solar modules into alternating current that can be used to power homes and businesses, or fed back into the grid. Now, inverters are getting smarter, with built in wireless connections that make it easier to track and manage system output.

In the past, inverter module housings were usually made of metal. But because metal is impenetrable by radio waves, SMA Solar Technology chose to replace metal with a flame-retardant grade of DuPont™ Zytel® in the cover for its “Sunny Boy” inverters. Each contains a Bluetooth® interface to enable wireless communication, and Zytel® doesn’t block the radio waves. At the same time, it meets the existing material property needs, including dielectric and  mechanical strength, stiffness and high dimensional stability.

One of the most important changes in photovoltaic technology has been making production more efficient. As purchase costs have come down, photovoltaic panels have become a more common sight on home and office rooftops.

The balance of mechanical and thermal properties found in DuPont™ Rynite® have made it a key material for cost-effective manufacturing of photovoltaic module frames and components. Two specific grades are currently available from DuPont for these applications: Rynite® 935SUV is a 35% glass-fiber/mineral-reinforced, UV-stabilized grade of polyethylene terephtalate (PET) suitable for injection molding; Rynite® 540SUV is a 40% glass-fiber-reinforced, UV-stabilized grade of PET suitable for extrusion and injection molding.

Reducing costs is only part of the equation. Solar systems must demonstrate consistent performance and be long-lasting, as well. That is why both grades of Rynite® combine high stiffness with low warpage, and have been specifically developed for long-term outdoor applications. Using Rynite® for frames helps provide resistance to ultraviolet rays, heat, wind and significant loads of snow, as well as enhanced durability and a high surface finish.