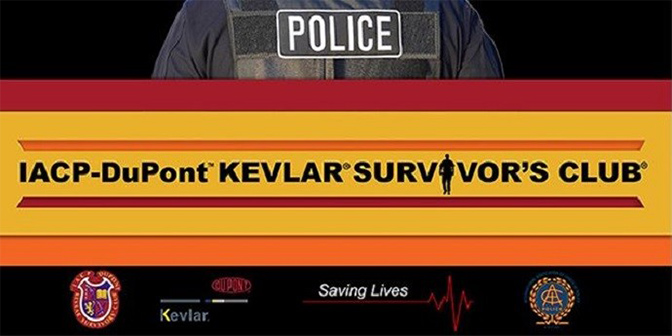 The IACP/DuPont™ Kevlar® Survivors’ Club® is pleased to announce that Deputy James A. DeFilipps from the Orleans County Sheriff’s Office in Orleans, New York, was chosen as the 2016 Honoree of the Year. A luncheon to celebrate Deputy DeFilipps as the recipient of this prestigious award will be held on October 15, 2016, during the 123rd IACP Annual Conference and Exposition in San Diego, California.

“The brave actions of Deputy James A. DeFilipps helped save the lives of his fellow officers,” said IACP President, Chief Terrence M. Cunningham, Wellesley, Massachusetts, Police Department.  “We are pleased to honor Deputy DeFilipps for being an example to others for wearing his vest.”

Since 1987, IACP has partnered with DuPont to honor those police officers who have survived life-threatening incidents because they were wearing their personal body armor. To-date, more than 3,100 officers who have been saved from death or serious injury by wearing body armor have been honored, with one officer chosen annually as the Honoree of the Year. The award helps to reinforce the use of body armor every day and every shift for officer safety. It also serves as a reminder of the heroic efforts police exhibit while serving their communities.

“Every day, law enforcement officers confront multiple, unpredictable situations that can quickly become life-threatening or disabling,” said Steve LaGanke, Global Marketing Manager, DuPont Protection Solutions. “At DuPont, we are committed to providing advanced materials that help officers, like Deputy DeFilipps, come home safely day after day. We hope that his inspiring story of heroism and survival will help reinforce the fact that wearing personal body armor can mean the difference between life and death.”

For more information about the IACP/DuPont™ Kevlar® Survivors’ Club®, visit www.theiacp.org/survivorsclub.  The IACP/DuPont™ Kevlar® Survivors’ Club® is part of the IACP Center of Officer Safety and Wellness, which focuses on the wellbeing of police officers, including physical health, nutrition and exercise, and mental health. For more information, visit www.theiacp.org/centerforofficersafetyandwellness.