Hurricanes No Match for Tyvek®

During a six-week period in 2004, the state of Florida experienced three hurricanes that have been characterized as some of the worst storms in the state’s history. Preliminary estimates have put damages at more than $35 billion. It was perhaps the worst possible time to have a home under construction. But for the Not So Big Showhouse, it was perhaps the best possible real-world test.

Designed by Sarah Susanka, this showhouse was being built as a practical learning center to exhibit best-practice home design and construction techniques. One in a series of demonstration homes being built around the country to meet specific environmental conditions, this home was designed to perform optimally in the humid, hurricane-wracked southeastern United States.

No one associated with this project ever imagined that the home would be pummeled by three hurricanes during the “dry-in” phase of construction. What the team did do was prepare for the frequent wind-driven rain of the Orlando climate by optimizing the design and selecting durable materials such as DuPont™ Tyvek® HomeWrap®. 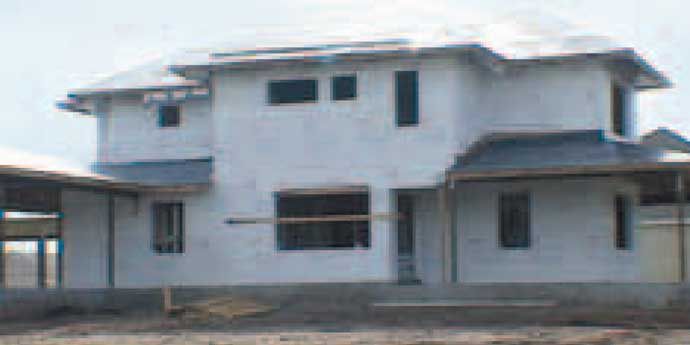 Designed as a secondary defense in water management to help manage a home’s wall systems, Tyvek® HomeWrap® is a weatherization membrane that provides a protective layer under a home’s cladding. Its unique, nonwoven-fiber structure resists air infiltration and water intrusion, yet readily allows moisture vapor to diffuse through the sheet, helping to prevent mold and mildew buildup and wood rot. When combined with DuPont Self-Adhered Flashing Products, it forms a formidable DuPont Building Envelope Solutions, providing a more comfortable, energy-efficient home.

“The destruction in the area was devastating. So I was extremely pleased to see that the only damage to the showhouse was that the tar paper had blown off the roof. The Tyvek® HomeWrap® was completely intact.”

Hurricanes Charley, Frances, and Ivan would put this DuPont Building Envelope Solutions system to the ultimate test. “I was really worried as I drove to the construction site after the first hurricane,” recalled Cameron Bradford, president of Bradford Building Corporation. “The destruction in the area was devastating. So I was extremely pleased to see that the only damage to the showhouse was that the tar paper had blown off the roof,” explained Bradford. “The Tyvek® HomeWrap® was completely intact, and when I went inside the house, it was dry.”

Unfortunately, Bradford would have to make the same anxiety-filled drive two more times within the next month and a half. “When these storms hit, the only thing that stood between the violent, wind-driven rain and the interior of the house was the DuPont Building Envelope Solution,” said Bradford. “It did a fantastic job of keeping the building dry, and compared to other houses in the area that were in a similar stage of construction, ours fared so much better.”

Bradford noted that the DuPont™ Tyvek® Specialists played an important role in the installation. “The Specialists helped my crew understand weatherization as a system. They explained that the system is more than just the Tyvek® HomeWrap®. They showed them how to use the Tyvek® Tape to create a virtually seamless protective weather envelope, how to flash window and door openings with DuPont™ FlexWrap™ and DuPont™ StraightFlash™, and how to properly space the Tyvek® Wrap Caps.”

“Using superior products and proper installation techniques resulted in an integrated weather barrier that survived intact after three hurricanes. I have DuPont and Tyvek® to thank for that,” said Bradford.

Bradford Building Corporation is a full-service residential and commercial builder serving Orange, Lake, Seminole, and Osceola counties. It has earned a reputation as one of Central Florida’s finest custom builders.

To learn more about the Not So Big Showhouse, visit www.notsobigshowhouse.com