Hurtling through outer space at more than 53,000 miles an hour, the National Aeronautics and Space Administration’s (NASA) Perseverance Rover successfully landed near the Jezero Crater on Mars on February 18, 2021. The Perseverance Rover will search for signs of ancient microbial life on Mars, using a drill to collect core samples of Martian rock and soil. The materials will then be stored in sealed tubes for pickup by a future mission that will ferry them back to Earth for detailed analysis. Perseverance will also test technologies to help pave the way for possible future human exploration of Mars.

About the size of mid-sized car, the Perseverance Rover includes lasers, sensors, cameras and other highly-specialized electronic equipment that will operate in the harsh environment found on the surface of Mars following the nearly 300-million-mile space journey from Earth. The reliability of this sophisticated equipment is crucial to the overall success of this mission. That’s why NASA is again using DuPont technology, including Kapton® polyimide films and Pyralux® copper-clad flexible circuit laminate materials, to power and protect the Perseverance mission to Mars.

According to Tim Scott, E&I Business Development Leader for the Aerospace & Defense market segment, DuPont and NASA have a long history together in space exploration. “Our Kapton® HN polyimide film was on the Apollo 11 mission over 50 years ago, recently celebrated 20 years of service on the International Space Station and is part of the current Mars Perseverance Rover project,” said Scott. He said that during the 1969 Apollo 11 mission to the moon—where Neil Armstrong and Buzz Aldrin first set foot on the lunar surface—20 of the 21 layers in his space suit were made with DuPont inventions, including DuPont™ Nomex® fiber and Kapton® polyimide film. Interestingly, Scott said that the first material to touch the lunar surface was the Kapton® on the landing gear footpads. In addition, he said the heat shield of the Apollo Command Module “Columbia” was covered in Kapton® and even the U.S. flag placed on the moon was made of DuPont nylon.

Scott said that this isn’t the first time that DuPont technology is heading for Mars. For more than 40 years, many of the Mars missions including orbiters, rovers and landers have used Kapton® films. The Mars exploration twin rovers–Spirit and Opportunity that landed in 2005–both contained nearly 70 yards each of Pyralux® flexible circuits and pressure-sensitive tape made from Kapton® polyimide film to control vibration. In addition, Pyralux® flexible cables secured with Kapton® tape offered durable, lightweight environmental resistance for the temperatures on Mars, that ranged from minus 120° Centigrade (minus 184° Fahrenheit) to 22° C (72° F). Hundreds of Kapton® thermofoil heaters were also used throughout the rovers to keep their batteries, electronics and computers warm during these 250°F daily temperature swings on the Martian surface. Each rover had nine cameras; four cameras helping it avoid hazards, two navigation cameras and three science cameras taking clear, high resolution images of the Martian surface. Pyralux® flexible circuits made using DuPont™ Riston® dry film photoresists that provided fine-line circuit images and helped ensure consistent quality images and reliable performance. 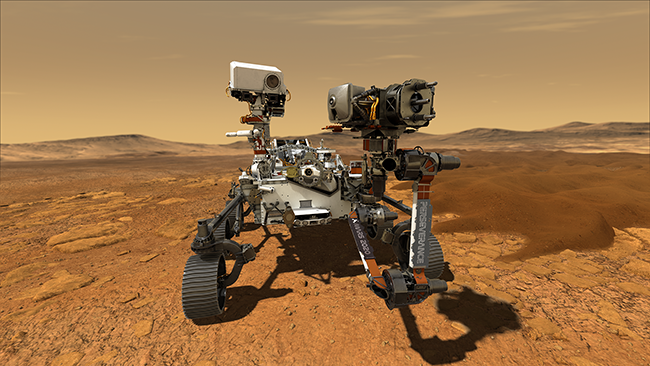 This illustration depicts NASA's Perseverance rover operating on the surface of Mars. Perseverance will land at the Red Planet's Jezero Crater a little after 3:40 p.m. EST (12:40 p.m. PST) on Feb. 18, 2021.

On the Mars mission that is currently underway, the Perseverance rover is equipped with technology that will examine rocks and soils with a camera, laser and spectrometers to seek organic compounds that could be related to past life on Mars. The rover will drill one-inch wide, two and one-half inches long holes in the Martian surface, collect the core samples and seal them in up to 43 tubes using its Sample Caching System. After the sample containers have been placed on the Martian surface, two other missions being planned by NASA and ESA (the European Space Agency) will complete the relay to get them back to Earth.  The second mission, Sample Retrieval Lander mission, will send a "fetch" rover to retrieve the sample tubes and deliver them to a special sample return container inside the Mars Ascent Vehicle. The Mars 2020 Perseverance rover may also deliver tubes with samples to the vicinity of the Mars Ascent Vehicle if it remains healthy enough during its mission. The Mars Ascent Vehicle will then launch the tubes into orbit.

The final mission, the Earth Return Orbiter mission, will fly an orbiter to Mars to rendezvous with the encapsulated samples, capture them in a highly secure containment capsule, and transport them back to Earth (likely, in the early 2030’s.)

Pyralux® materials were the Mariner, Voyager and Messenger programs that measured Mercury and Venus’ environment, atmosphere and captured images of their surfaces, and the 2015 New Horizons mission that explored Pluto and its moons.

Over the next decade, he said more than 5,000 small spacecraft (“smallsats”, weighing less than 500kg) are forecasted to be developed and launched. Developing reconfigurable antennas that are lightweight, low-power and miniaturized will be critical for performance of the various smallsat systems (telemetry, tracking and control (TTC), navigation, space-to-earth or space-to-space communications, radars and remote sensing).  Scott said the performance of Kapton® films and Pyralux® laminates will continue to play a key role in the development of advanced antennas suitable for smallsat applications.

Scott says one of the newest products showing promise for passive thermal control systems on spacecraft and satellites is a white-colored Kapton® polyimide film for use on deployable radiator panels or as the outer surface of a multi-layer insulation (MLI) blanket. This product was recently tested by Airbus Defense & Space in Europe and the positive findings presented during a conference of the European Space Agency in late 2020. He says the Airbus study findings have led to interest from other aerospace companies interested in white-colored Kapton® polyimide as an alternative to reflective white paints or second-surface mirror (SSM) foils. These external coatings need to withstand harsh conditions found in space environments; multiple types of ionizing and non-ionizing radiation, orbital debris impacts, thermal cycling, and atomic oxygen which deteriorate satellite materials.  Depending on the type of paint used, they can often suffer from greater physical damage and thermal degradation due to the space environment and can be challenging to apply.

“We have been able to demonstrate that our technology performs reliably in the extreme heat, cold and space weather conditions experienced by vehicles involved in outer space mission or in satellites orbiting the earth,” Scott said. “As these space missions get more complex, we continue to look for new ways to use our existing technologies or develop new ones to meet the ever-growing technological challenges being faced.”