On Christmas Day 2021, after 30 years in development, the National Aeronautics Space Administration’s (NASA) James Webb Space Telescope (JWST) was launched from the European Space Agency’s launch site at Kourou in French Guiana. DuPont technology, in the form of ultra-thin Kapton® polyimide films, is the crucial material protecting the JWST from the light and the heat of the sun, enabling it to function properly in space. 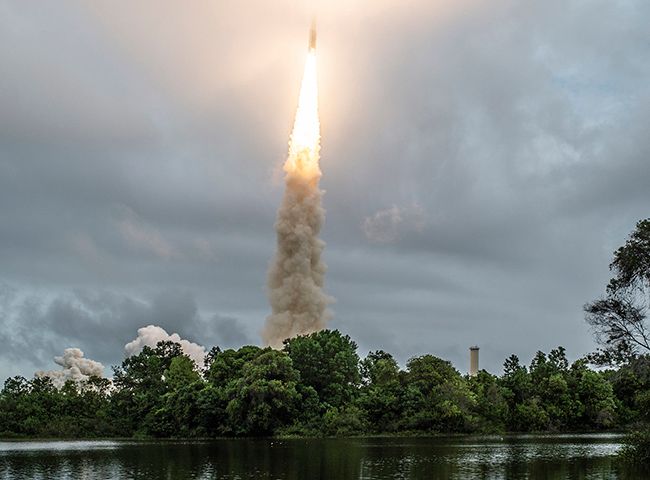 Space is one of the most hostile and extreme environments imaginable. Above the insulating atmosphere of the Earth, spacecraft are subjected to extreme temperature, both hot and cold, and a significantly increased threat of radiation damage.

The $10 billion JWST is the largest space telescope ever built and features a deployable mirror measuring more than 21 feet in diameter, made up of 18 hexagonal mirror segments. The gold-plated beryllium mirror segments are more than 8 feet in diameter and will focus on four main areas: first light in the universe, assembly of galaxies in the early universe, birth of stars and protoplanetary systems, and planets (including the origins of life.)  At the heart of the JWST is the Integrated Science Instrument Module (ISIM) a suite of four instruments including a near-infrared camera, a mid-infrared instrument, a fine guidance sensor and two different near-infrared spectrographs. 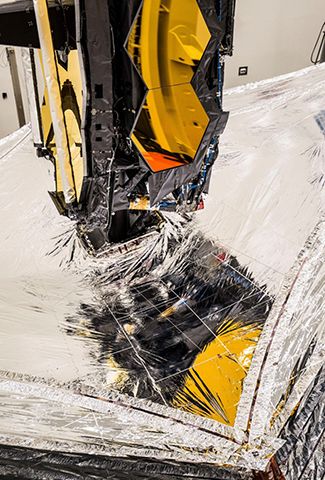 Each of the five layers of the sunshield is uniquely sized, shaped, and has special rip-stop patterning to add durability to the ultra-thin Kapton® membranes.  Credits: Northrop Grumman 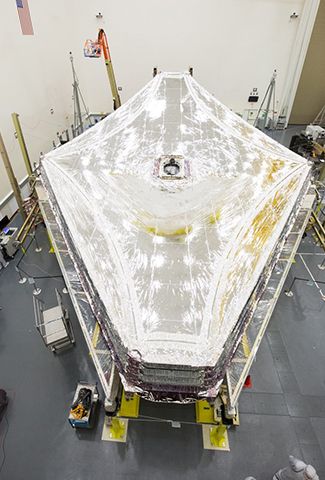 While in orbit, the JWST will be pointed so that the sun, Earth and moon are always on one side, with the sunshield acting as an umbrella to shade the telescope mirrors and instruments from the warmer spacecraft electronics and the sun. Credits: Northrop Grumman

The JWST is the successor to the 30-year old Hubble space telescope and improves on Hubble in two key ways. The first is its size: Hubble is about the size of a school bus, whereas Webb is about half the size of a 737 aircraft.  Hubble's mirror is approximately eight feet in diameter, while JWST's deployable mirror is more than 21 feet in diameter, making it 100 times more powerful than the Hubble. The JWST will operate near the Earth–Sun L2 (Lagrange point), approximately 1,500,000 km (930,000 mi) beyond Earth's orbit.  By way of comparison, Hubble orbits 550 km (340 mi) above Earth's surface, and the Moon is roughly 400,000 km (250,000 mi) from Earth.

The Kapton®-enabled sunshield is a critical part of the Webb telescope design because the infrared cameras and instruments aboard must be kept very cold, under -370°F. and out of the sun's heat and light in order to function properly. Each successive layer of the sun shield is cooler than the one below. The sunshield separates the observatory into a warm, sun-facing side with a maximum temperature of the outermost layer is 230° F, and a cold side with a minimum temperature of roughly -394° F.

This isn’t the first time that NASA has selected DuPont technology to protect spacecraft   designed for exploration missions. For more than 50 years, DuPont has demonstrated that its technology performs reliably in extreme temperature flux, atomic oxygen, particle and electromagnetic radiation, space debris and other space weather conditions experienced by satellites.  As space missions become more complex, DuPont continues to research and create new ruggedized variations of Kapton® to better withstand the unique conditions found in space.